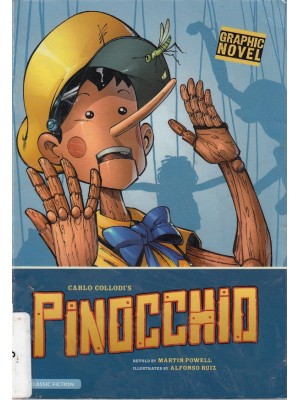 The Adventures of Pinocchio is a novel for children by Italian author Carlo Collodi, written in Pescia

The Adventures of Pinocchio is a story about an animated puppet, boys who turn into donkeys and other fairy tale devices. The setting of the story is the Tuscan area of Italy. It was a unique literary marriage of genres for its time. The story's Italian language is peppered with Florentine dialect features, such as the protagonist's Florentine name.
In the 1850s, Collodi began to have a variety of both fiction and non-fiction books published. Once, he translated some French fairy-tales so well that he was asked whether he would like to write some of his own. In 1881, he sent a short episode in the life of a wooden puppet to a friend who edited a newspaper in Rome, wondering whether the editor would be interested in publishing this "bit of foolishness" in his children's section. The editor did, and the children loved it. The Adventures of Pinocchio were serialized in the paper in 1881–2, and then published in 1883 with huge success.
In the original, serialized version, Pinocchio dies a gruesome death: hanged for his innumerable faults, at the end of Chapter 15. At the request of his editor, Collodi added chapters , in which the Fairy with Turquoise Hair (or "Blue Fairy", as the Disney version names her) rescues Pinocchio and eventually transforms him into a real boy, when he acquires a deeper understanding of himself, making the story more suitable for children. In the second half of the book, the maternal figure of the Blue-haired Fairy is the dominant character, versus the paternal figure of Geppetto in the first part.
Children's literature was a new idea in Collodi's time, an innovation in the 19th century. Thus in content and style it was new and modern, opening the way to many writers of the following century.