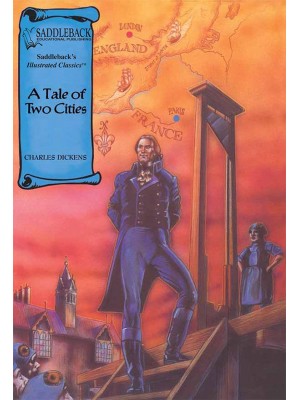 A Tale of Two Cities

It was the best of times, it was the worst of times," Charles Dickens writes in the opening lines of A Tale of Two Cities as he paints a picture of life in England and France

The year is late 1775, and Jarvis Lorry travels from London to Paris on a secret mission for his employer, Tellson's Bank. Joining him on his journey is Lucie Manette, a 17-year-old woman who is stunned to learn that her father, Doctor Alexandre Manette, is alive and has recently been released after having been secretly imprisoned in Paris for 18 years.
When Mr. Lorry and Lucie arrive in Paris, they find the Doctor's former servant, Ernest Defarge, caring for him. Defarge now runs a wine-shop with his wife in the poverty-stricken quarter of Saint Antoine. Defarge takes Mr. Lorry and Lucie to the garret room where he is keeping Doctor Manette, warning them that the Doctor's years in prison have greatly changed him. Thin and pale, Doctor Manette sits at a shoemaker's bench intently making shoes. He barely responds to questions from Defarge and Mr. Lorry, but when Lucie approaches him, he remembers his wife and begins to weep. Lucie comforts him, and that night Mr. Lorry and Lucie take him to England.
Five years later, the porter for Tellson's Bank, Jerry Cruncher, takes a message to Mr. Lorry who is at a courthouse. Mr. Lorry has been called as a witness for the trial of Charles Darnay, a Frenchman accused of being a spy for France and the United States. Also at the trial are Doctor Manette and Lucie, who are witnesses for the prosecution. Doctor Manette has fully recovered and has formed a close bond with his daughter