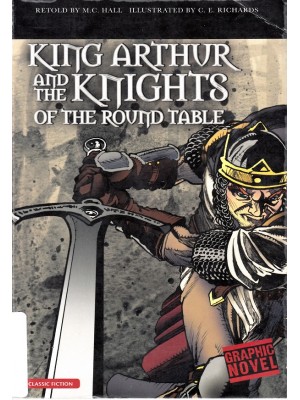 King Arthur and the Knights of the Round Table

Retold out of the old romances, this collection of Arthurian tales endeavors to make each adventure--"The Quest for the Round Table, " "The First Quest of Sir Lancelot, " "How the Holy Grail Came to Camelot, " and so forth--part of a fixed pattern that effectively presents the whole story, as it does in Le Morte D'Arthur, but in a way less intimidating to young readers. All Ages

:Summary
After Uther Pendragon's death, Merlin the magician forms a stone and in it a sword. On this sword it is written that anyone who can pull it out of the stone will become the new King of England. After many years, the young Arthur, secretly the son of Uther Pendragon, pulls the sword out of the stone and becomes King. Together with Merlin, he constructs a round table, at which only the best knights of England may sit. More and more knights come to join the brotherhood of the Round Table, and each has his own adventures.
Eventually, the holy knight Galahad, the son of Sir Lancelot, comes to Arthur's court. With his coming, all the knights ride throughout Europe in search of the Holy Grail of Jesus Christ. Only four knights see the Grail: Sir Lancelot, Sir Percival, Sir Bors de Gaunnes, and Sir Galahad.
After the Grail is found, the last battle of the Knights of the Round Table is fought. In this battle many knights die, and with them King Arthur, Sir Gawain, who is Arthur's nephew, and Mordred, the wicked son of King Arthur, and his half-sister Morgana le Fay. King Arthur is taken away to Avalon, a secret island after he is terribly wounded by Mordred while he was making the final stab with his sword to kill Mordred