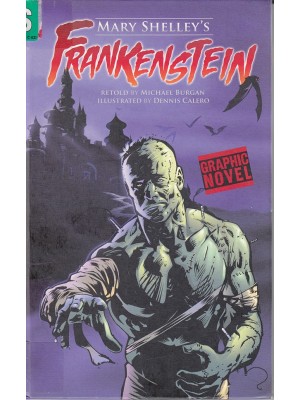 Mary Shelley began writing Frankenstein when she was only eighteen. At once a Gothic thriller, a passionate romance, and a cautionary tale about the dangers of science, Frankenstein tells the story of committed science student Victor Frankenstein

Victor begins by telling of his childhood. Born in Naples, into a wealthy Genevan family, Victor and his brothers, Ernest and William, all three being sons of Alphonse Frankenstein by the former Caroline Beaufort, are encouraged to seek a greater understanding of the world through chemistry. As a young boy, Victor is obsessed with studying outdated theories that focus on simulating natural wonders. When Victor is five years old, his parents adopt Elizabeth Lavenza, the orphaned daughter of an expropriated Italian nobleman, with whom Victor later falls in love. (During this period, Victor's parents, Alphonse and Caroline, take in yet another orphan, Justine Moritz, who becomes William's nanny.)
Weeks before he leaves for the University of Ingolstadt in Germany, his mother dies of scarlet fever; Victor buries himself in his experiments to deal with the grief. At the university, he excels at chemistry and other sciences, soon developing a secret technique to impart life to non-living matter. Eventually, he undertakes the creation of a humanoid, but due to the difficulty in replicating the minute parts of the human body, Victor makes the Creature tall, about 8 feet (2.4 m) in height and proportionally large. Despite his intentions, the beautiful creation of his dreams is instead hideous, with yellow eyes and skin that barely conceals the muscle tissue and blood vessels underneath. Repulsed by his work, Victor flees and dismisses him when it awakens. While wandering the streets, he meets his childhood friend, Henry Clerval, and takes Henry back to his apartment, fearful of Henry's reaction if he sees the monster. Victor does not have to deal with that issue, however, because the monster has escaped.
Victor falls ill from the experience and is nursed back to health by Henry. After a four-month recovery, he returns home when he learns of the murder of his brother William. Upon arriving in Geneva, Victor sees the Creature near the crime scene and climbing a mountain, leading him to believe his creation is responsible. Justine Moritz, William's nanny, is convicted of the crime after William's locket, which had contained a miniature portrait of Caroline, is found in her pocket. Victor is helpless to stop her from being hanged, as he knows no one would believe his story.